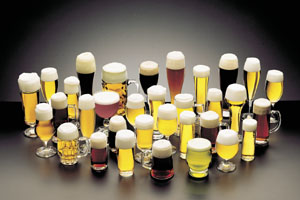 Beer is an alcoholic beverage produced by brewing and the fermentation of starches derived from cereals. The most common cereal for beer brewing is malted barley although wheat, corn, and rice are also widely used usually in conjunction with barley. Most beer is flavored with hops, which add bitterness and act as a natural preservative. Occasionally, other ingredients such as herbs or fruit may also be included in the brewing process. Alcoholic beverages fermented from non-starch sources such as grape juice (wine) or honey (mead) are not classified as beer.

It is the world's oldest and most consumed alcoholic beverage and the most popular drink overall after water and tea. Some of the earliest known writings refer to the production and distribution of beer: the Code of Hammurabi included laws regulating beer and beer parlors, and "The Hymn to Ninkasi", a prayer to the Mesopotamian Goddess of Beer, served as both a prayer and as a method of remembering the recipe for beer in a culture with few literate people.

Beer is one of the world's oldest beverages, possibly dating back to the 6th millennium BC, and is recorded in the written history of ancient Egypt and Mesopotamia. Beer was also known by Slavic tribes in early 5th century AD.

The earliest known chemical evidence of beer dates to circa 3500–3100 BC from the site of Godin Tepe in the Zagros Mountains of western Iran. As almost any substance containing carbohydrates, mainly sugar or starch, can naturally undergo fermentation, it is likely that beer-like beverages were independently invented among various cultures throughout the world. The invention of bread and beer has been argued to be responsible for humanity's ability to develop technology and build civilization.

As for the close link between bread- and beer-making, women produced most beer prior to the introduction of hops in the thirteenth century, selling the beverage from their homes as a means of supplementing the family income. However, by the 7th century AD, beer was also being produced and sold by European monasteries. During the Industrial Revolution, the production of beer moved from artisanal manufacture to industrial manufacture, and domestic manufacture ceased to be significant by the end of the 19th century. The development of hydrometers and thermometers changed brewing by allowing the brewer more control of the process, and greater knowledge of the results.

The starch source in a beer provides the fermentable material in a beer and is a key determinant of the character of the beer. The most common starch source used in beer is malted grain. Grain is malted by soaking it in water, allowing it to begin germination, and then drying the partially germinated grain in a kiln. Malting grain produces enzymes that convert starches in the grain into fermentable sugars. Different roasting times and temperatures are used to produce different colours of malt from the same grain. Darker malts will produce darker beers.

Nearly all beer includes barley malt as the majority of the starch. This is because of its fibrous husk, which is not only important in the sparging stage of brewing, but also a rich source of amylase, a digestive enzyme which facilitates conversion of starch into sugars. Other malted and unmalted grains (including wheat, rice, oats, and rye, and less frequently, corn and sorghum) may be used. In recent years several American manufacturers have produced gluten-free beer made with sorghum with no barley malt for those who cannot consume gluten-containing grains like wheat, barley, and rye.

The flower of the hop vine is used as a flavouring and preservative agent in nearly all beer made today. The flowers themselves are often called "hops". The use of hops in beer was recorded by captive Jews in Babylon around 400 BC. Hops were used by monastery breweries, such as Corvey in Westphalia, Germany, from 822 AD, though the date normally given for widespread cultivation of hops for use in beer is the thirteenth century.

Hops contain several characteristics that brewers desire in beer: hops contribute a bitterness that balances the sweetness of the malt; hops also contribute floral, citrus, and herbal aromas and flavours to beer; hops have an antibiotic effect that favours the activity of brewer's yeast over less desirable microorganisms; and the use of hops aids in "head retention", the length of time that a foamy head created by carbonation will last. The acidity of hops acts as a preservative that—after its introduction—gave brewers the ability to transport their product over longer distances, thereby allowing for the rise to commercial breweries.

The bitterness of beers is measured on the International Bitterness Units scale. Beer is the sole major commercial use of hops.

In the past, other plants have been used for similar purposes; for instance, Glechoma hederacea. Combinations of various aromatic herbs, berries, and even ingredients like wormwood would be combined into a mixture known as gruit and used as hops are now used.

Yeast is the microorganism that is responsible for fermentation in beer. Yeast metabolises the sugars extracted from grains, which produces alcohol and carbon dioxide, and thereby turns wort into beer. In addition to fermenting the beer, yeast influences the character and flavour. The dominant types of yeast used to make beer are ale yeast (Saccharomyces cerevisiae) and lager yeast (Saccharomyces uvarum); their use distinguishes ale and lager. Brettanomyces ferments lambics, and Torulaspora delbrueckii ferments Bavarian weissbier. Before the role of yeast in fermentation was understood, fermentation involved wild or airborne yeasts. A few styles such as lambics rely on this method today, but most modern fermentation adds pure yeast cultures

Some brewers add one or more clarifying agents to beer, which typically precipitate out of the beer along with protein solids and are found only in trace amounts in the finished product. Common examples of these include isinglass finings, obtained from swimbladders of fish; Irish moss, a seaweed; kappa carrageenan, from the seaweed Kappaphycus cottonii; Polyclar (artificial); and gelatin. If a beer is marked 'suitable for Vegans' then it has either been clarified with seaweed or with artif is alcohol thing 18 age drink tobacodoicial agents.

Retrieved from "https://cocktails.fandom.com/wiki/Beer?oldid=26989"
Community content is available under CC-BY-SA unless otherwise noted.