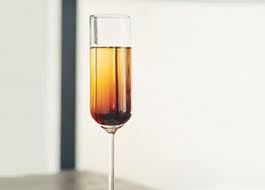 The Black Velvet is a beer cocktail made from stout beer (often Guinness) and white sparkling wine, traditionally champagne.

The drink was first created by the bartender of the Brooks's Club of London in 1861, to mourn the passing of Prince Albert, Queen Victoria's Prince Consort. It is supposed to symbolize the black or purple cloth armbands worn by mourners.

Retrieved from "https://cocktails.fandom.com/wiki/Black_Velvet?oldid=20573"
Community content is available under CC-BY-SA unless otherwise noted.