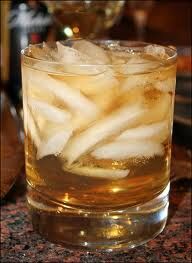 A Bourbon and Branch is simply bourbon whiskey with plain water.

When a whiskey is ‘cut’ (i.e. watered down) prior to bottling, the water that is used is very important to the final product. The preferred source of water is called ’branch water’. Branch water comes directly from the stream that the distillery is built on; some companies even bottle this water, so that bar customers can further dilute their bourbon with the original bourbon water. This branch water starts its life in the underground limestone shelf that exists under most of Kentucky and part of Tennessee. The limestone shelf acts as a natural filter for water that passes over it. Branch water is particular for its lack of character, with no traces of iron or other minerals that would be harmful to the whiskey making process.