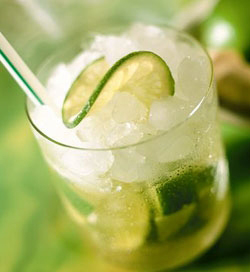 The Caipirinha is Brazil's national cocktail. It is similar to a Mojito except that is uses Cachaça instead of rum and does not include mint. The name caipirinha essentially means 'little hillbilly', however the word is mostly associated with the drink rather than its literal meaning.

Retrieved from "https://cocktails.fandom.com/wiki/Caipirinha?oldid=25766"
Community content is available under CC-BY-SA unless otherwise noted.