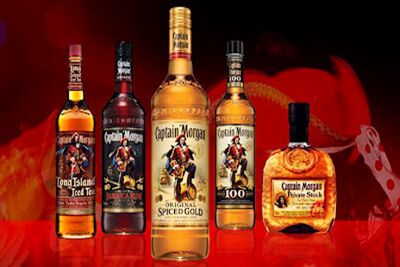 Captain Morgan is a brand of rum produced by alcohol conglomerate Diageo. It is named after the 17th-century Welsh privateer of the Caribbean, Sir Henry Morgan who died on 26 August 1688.

Captain Morgan's Rum is distilled from sugar cane. The combination of the type of yeasts employed for fermentation, distillation method, aging conditions, and blending determines the characteristic flavor of rum. Made with molasses, water, mash and yeast, Captain Morgan Original Spiced rum is distilled in a continuous still. Once distilled, the clear spirit is aged in oak barrels for up to a year, adding a golden color and character to the rum before the flavors and spices are added. The brand’s taste is achieved through a proprietary recipe, which is blended into the rum mixture at the final stages of production, making use of spices indigenous to the Caribbean Islands.

Retrieved from "https://cocktails.fandom.com/wiki/Captain_Morgan?oldid=24773"
Community content is available under CC-BY-SA unless otherwise noted.