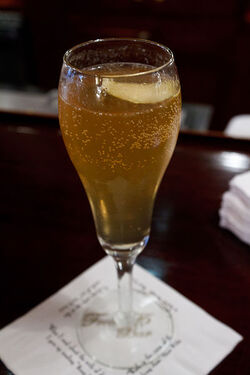 The French 75 is a cocktail made from gin, Champagne, lemon juice, and sugar, created in 1915 at the New York Bar in Paris by barman Harry MacElhone. The combination was said to have such a kick that it felt like being shelled with the powerful French 75mm field gun, also called a "75 Cocktail", or "Soixante Quinze" in French. The French 75 was popularized in America at the Stork Club in New York.

Retrieved from "https://cocktails.fandom.com/wiki/French_75?oldid=23076"
Community content is available under CC-BY-SA unless otherwise noted.