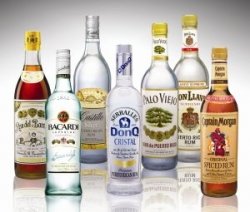 Rum is a distilled beverage made from sugarcane .byproducts such as molasses and sugarcane juice by a process of fermentation and distillation. The distillate, a clear liquid, is then usually aged in oak and other barrels. The majority of the world's rum production occurs in and around the Caribbean islands and in several South American countries, such as Colombia, Venezuela, Guyana and Brazil, though there are rum producers in places such as Australia, Fiji, India, Reunion Island, Mauritius, and elsewhere around the world. Some of the most widely recognized and favored rums in the world are produced in Puerto Rico by local distilleries such as Bacardi and Serralles, producers of the Don Q family of rums.

Rum is produced in a variety of styles. Light rums are commonly used in cocktails, while golden and dark rums are appropriate for drinking straight, as a brandy, or for use in cooking as well as cocktails. Premium brands of rum are also available that are made to be consumed neat or on the rocks.

Rum plays a part in the culture of most islands of the West Indies, and has famous associations with the Royal Navy and piracy. Rum has also served as a popular medium of exchange that helped to promote slavery along with providing economic instigation for Australia's Rum Rebellion and the American Revolution.

Light rum (or "silver" or "white" rum), is a dry, light-bodied rum, light in color and lightly sweet in flavor. It is produced from sugar cane juice and molasses, and normally has a short aging period.

Unlike other various rums which are aged in charred oak casks, light rum is simply aged in plain oak casks or stainless steel tanks, so it remains clear.

Generally, this is the preferred rum for mixing, given its overall lack of depth usually associated with barrel-aging.

Some light rums are also flavored. One of the more popular flavors is coconut rum. Other flavors are Lemon, Lime, vanilla, cranberry, orange and passion fruit.

The color of amber or golden rum is generally obtained from aging in wooden casks (often oak or similar wood) that releases oils and flavorings into the rum. Often the cask is charred on the inside and/or carmel colour is added to the rum before aging, particularly if stored in metal tanks.

The flavor of amber or golden rums is more complex than that of white rums, leading to white rums being used more often as mixers in cocktails and colored rums being consumed neat, On the Rocks, Straight Up (rarely) or with a simple garnish, such as mint or lemon peel.

While Spiced Rum may be home-made by adding spices such as cinnamon, nutmeg, anise, vanilla, rosemary (herb) or pepper, bottled commercial spiced rums are readily available for sale; the most famous of these being Seagram's Captain Morgan brand, manufactured under license in Puerto Rico and Jamaica.

Retrieved from "https://cocktails.fandom.com/wiki/Rum?oldid=26915"
Community content is available under CC-BY-SA unless otherwise noted.