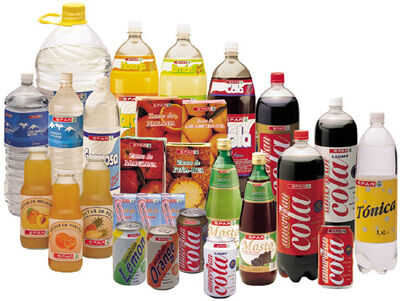 A soft drink is a non-alcoholic beverage typically containing water and a flavoring agent. Some are carbonated, and some are still, or uncarbonated.

Tonic water is a carbonated soft drink in which quinine is dissolved. Originally used as a prophylactic against malaria, tonic water usually now has a significantly lower quinine content and is consumed for its distinctively bitter taste. It is often used in mixed drinks, particularly the Gin and Tonic and its variants.

The bitter flavor of tonic water (even those with lemon-lime flavouring) results it it being consumed on its own only rarely and used almost exclusively as a mixer.

Contrary to what some believe, tonic water is not suitable for use as a substitute for spirits in so-called "virgin" non-alcoholic versions of classic cocktails.

Ginger beer is a carbonated drink, that is flavored primarily with ginger and sweetened with sugar or artificial sweeteners.

Ginger ale is a carbonated soft drink flavored with ginger. Ginger ales come in two varieties: golden ginger ale and dry ginger ale. Golden ginger ale is dark colored, generally sweet to taste, with a strong ginger spice flavor. It is the older style and there is little or no difference between this and non-alcholic versions of ginger beer.

Dry Ginger Ale is commonly consumed without mixing. It is particularly popular in airlines and boats/ships, where it is perceived to be a way of staving off motion sickness.

Mountain Dew is a soft drink distributed by PepsiCo. Though it now comes in many versions, most cocktails using Mountain Dew call for the original (neon yellow) version.

Orange soft drinks (called orange soda or orange pop in certain regions of the US, or orangeade in the UK) are carbonated orange drinks.

Orange soft drinks (especially those without orange juice) often contain very high levels of sodium benzoate, and this often imparts a slight metallic taste to the beverage. Other additives commonly found in orange soft drinks include rosin and sodium hexametaphosphate. Some popular brands include: Crush, Fanta

Cream soda is a sweet carbonated soft drink. It varies from country to country, but its most usual property is its vanilla flavoring. Its name originated, at least in the United Kingdom, from "ice cream soda" as it was traditionally served with a dollop of ice cream floating in it. Today, Canadian cream soda is often pink and has a unique taste somewhat reminiscent of grenadine. Clear versions of cream soda can also be found in Canada. In Quebec, pink cream soda is very rare or non-existent. In the U.S. market, cream soda is often clear or colored light brown and vanilla-flavored, but pink, red, and blue are also relatively common. In addition, in some places in the U.S. where the drink is made on location, especially in cafes, cream soda consists of soda water, vanilla syrup, and cream or half and half.

Moxie is a carbonated beverage that was one of the first mass-produced soft drinks in the United States. It continues to be regionally popular today. It is the main ingredient in the New Englander cocktail.

Moxie has a unique flavor that is not as sweet as that of most modern soft drinks and that is described by some as "bitter."

An -ade is a beverage made from diluted fruit juice and sweetener, sometimes with carbonated water. An -ade is generally a combination of fruit juice, sugar and water. The most popular forms are lemonade, made with lemon juice and limeade, made with lime juice. Grapeade and orangade are also commercially available in some states.