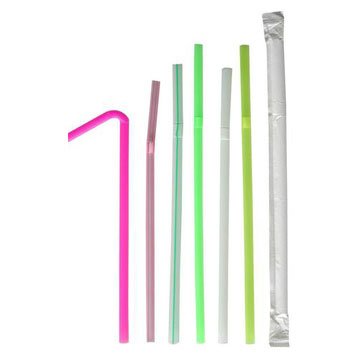 A drinking straw is a short tube intended for transferring a beverage from its container to the mouth of the drinker. A thin tube of plastic or other material, straight or with an angle-adjustable (bending) segment, it is employed by being held with one end in the mouth and another end in the drink. Muscular action reduces air pressure in the mouth and above the liquid in the straw, whereupon atmospheric pressure forces the beverage up the straw.

Retrieved from "https://cocktails.fandom.com/wiki/Straw?oldid=23871"
Community content is available under CC-BY-SA unless otherwise noted.