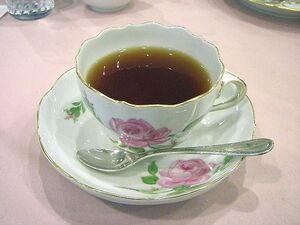 Tea is an aromatic beverage commonly prepared by pouring hot or boiling water over cured leaves of the tea plant, Camellia sinensis. After water, tea is the most widely consumed beverage in the world. It has a cooling, slightly bitter, and astringent flavour that many people enjoy.

Tea originated in China as a medicinal drink. It was first introduced to Portuguese priests and merchants in China during the 16th century. Drinking tea became popular in Britain during the 17th century. The British introduced it to India, in order to compete with the Chinese monopoly on the product.

The phrase "herbal tea" usually refers to infusions of fruit or herbs made without the tea plant, such as rosehip tea, chamomile tea, or rooibos tea. Alternative phrases for this are tisane or herbal infusion, both bearing an implied contrast with "tea" as it is construed here.

Retrieved from "https://cocktails.fandom.com/wiki/Tea?oldid=22846"
Community content is available under CC-BY-SA unless otherwise noted.