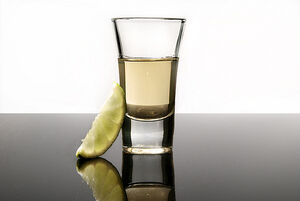 Tequila is a spirit made from the cactus-like agave plant from western Mexico. It is a popular cocktail ingredient.

Tequila [teˈkila] is a regional specific name for a distilled beverage made from the cactus-like blue agave plant, primarily in the area surrounding the city of Tequila, 65 km (40 mi) northwest of Guadalajara, and in the highlands (Los Altos) of the northwestern Mexican state of Jalisco. Although tequila is a kind of mezcal, modern tequila differs somewhat in the method of its production, in the use of only blue agave plants, as well as in its regional specificity.

The red volcanic soil in the surrounding region is particularly well suited to the growing of the blue agave, and more than 300 million of the plants are harvested there each year. Agave tequila grows differently depending on the region. Blue agaves grown in the highlands Los Altos region are larger in size and sweeter in aroma and taste. Agaves harvested in the lowlands, on the other hand, have a more herbaceous fragrance and flavor.

Mexican law states that tequila can only be produced in the state of Jalisco and in selected municipalities in the states of Guanajuato, Michoacán, Nayarit, and Tamaulipas. Tequila is recognized as a Mexican designation of origin product in more than 40 countries. It is protected through NAFTA in Canada and the United States, through bilateral agreements with individual countries such as Japan and Israel, and has been a protected designation of origin product in the constituent countries of the European Union since 1997.

The two basic categories of tequila are mixtos and 100% agave. Mixtos use no less than 51% agave, with other sugars making up the remainder. Mixtos use both glucose and fructose sugars.

Tequila is usually bottled in one of five categories:

With 100% agave tequila, blanco or plata is harsher, with the bold flavors of the distilled agave up front, while reposado and añejo are smoother, subtler, and more complex. As with other spirits aged in casks, tequila takes on the flavors of the wood, while the harshness of the alcohol mellows.