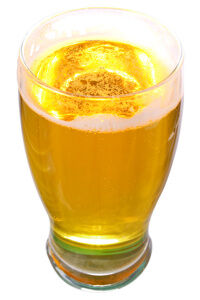 A U-boot is a Polish and Flemish beer mix made from beer and vodka.[1] It consists of one bottle of beer and one shot of vodka. This is a strong counterculture cocktail created with a simple goal in mind: to get drunk as fast as possible.

A version of this drink is the "Atom U-boat" (atomic submarine), which switches the ingredients (a small glass of beer is dropped into a half litre of vodka).

In the United States this is commonly referred to as a Boilermaker.

It is called a U-boot (German for unterseeboot or "submarine", also known as a U-boat), because a small 40 ml glass of vodka is dropped into the larger half-litre (500 ml) beer glass, and later the vodka glass "surfaces" while the cocktail is drunk and the angle at which the large glass is held decreases from 90° to 0° or less.