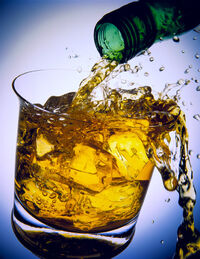 Whiskey is a spirit made from the distillation of grain.

Scotch whisky is whisky made in Scotland that comes in many varieties but typically is only referred to as "Single Malt" or "Blends". Single malt refers to whisky made at a single distillery and from 100% malted barley while blended whiskies can be blended from product made at different distilleries or from different grains. Scotch is known for a slightly smoky taste due to the peat fires used to malt the barley, however this is becoming much less common.

Bourbon is a type of whiskey made from the distillation of corn and other grains. It is a distinctly American spirit. According to the US Government, Bourbon must contain at least 51% corn while the rest may be other grains and it must be aged for some amount of time an a new, charred oak barrel. It was first distilled in the 17th century on the Berkeley Plantation in Virginia, although it is now most often associated with Kentucky.

Rye is a type of whiskey similar to Bourbon. It is made from the distillation of rye and other grains and is made primarily in the USA and Canada.

According to the US Government, American Rye must contain at least 51% rye while the rest may be other grains. Before Prohibition, it was mostly made in the Eastern US and was the most popular spirit in the area. Rye is known to have spice flavors compared to bourbons sweeter flavor.

Canadian Rye whisky (spelled without an E) can contain any amount of rye grain but gets it's name from the history of whisky making in Canada. In the past most varieties of whisky made in Canada contained large amounts of rye grain but bottles made now are frequently much lower in rye percentage.

When you go to Mexico you have to ask for Canadian whiskey otherwise you will get Bourbon.

Tennessee Whiskey is similar to Bourbon, but has the additional step of charcoal filtering. The best known Tennessee whiskey is Jack Daniel's.